I’ve tried for fun ,to record with a cheap USB Sound Card, a Radxa Rock Board with a custom kernel (added some audio and USB modules) running  Ubuntu Server  and the Explorer E202 , some stations  in the VLF band. We usually monitor them in  Turin observatory for SID correlations (http://sidmonitor.rf.gd/gallery/station.html ) 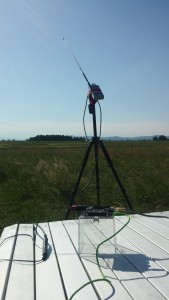 The VLF receiver connected to the Radxa Rock Board

I’ve used the  Linux freeware application SOX to record and create spectrograms. The audio was recorded at a sample rate of 48000 Hz. As you can see are clearly visible a lot of Navy stations  for submarines like HWU (FRA) on 20.9 kHz, the Norwegian JXN on 16,4 kHz (http://en.wikipedia.org/wiki/Noviken_VLF_Transmitter )  and of course the three main Russian Alpha stations on 14.88 kHz , 12,64 kHz and 11.90 kHz. There is also an unknown signal on 16.0 kHz, probably generated by my laptop HD or the integrated mouse.  The vertical lines are due to lightning discharge thousand of miles away from my position they are called “spherics”.( http://www.vlf.it/parmigiani-frozen/frlight.htm )This is the full spectrum recorded with SOX and Linux: 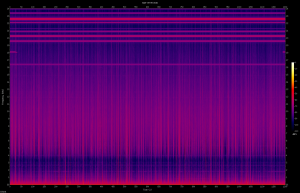 This is  a final elaboration of the recording using WinRad software. The “bee-boo” you hear is one of the Russian Navy Navigation frequency systems.(http://www.vlf.it/alphatrond/alpha.htm ) Watch in HD to see better the full spectrum.