It is not easy for me to start this full article, as it collects about a couple of years of technical work conducted with other friends . I decided to divide this work into three parts. A first part made by Jan Jozef Oksiuta (VK4EBP) from Australia, a second that follows some old works done by Kurt Diedrich from Germany  and the hardware used during this test and a last one  where I used the same equipment  in my  garden, collecting signals scattered by amplitude modulation of the 50 Hz power grid for about a year or more. I also want to thanks D. Hine for  his  ” philosophical ” and lateral contribution  that  enticed our curiosity to deepen (and finally  to deny) some of his bizarre esoteric theses .  As a matter of fact, it has been a great experience that has led to the realization of other ongoing projects currently underway and under development. All the work done is personal production of the article’s authors and refer to them for any form of use of it. I also would like to thank you Renato Romero and Claudio Re for helping me in other investigations which started off from this joint work and will be discussed  next.

This work was born from a correspondence between me and Kurt Diedrich ( http://www.vlf.it/kurt/elf.html )about a signal received in the Val Troncea in November 2013. (You can see some recording examples here ( http://www.vlf.it/francionegallery/troncea_2014.html )I was surprised by this type of signal in a desert and quiet place over the Western Alps , where usually natural signals under 10 Hz are received loud and clear like Alfvèn Resonances or Geomagnetic pulsations. I seemed to see in this signal a possible relationship with anything related to  power lines harmonics very similar to what is called PLHR Power line harmonic radiation ( http://onlinelibrary.wiley.com/doi/10.1029/2005JA011480/abstract ) Anyway this was the signal received in 2013  up there.The rest was the result of mere curiosity.

A capture from a one night record made in Western Alps By Fabrizio Francione using an ICS101 Coil . (PLHR?)

It is a common observation that sub-50Hz ELF signals seen on spectrograms appear to have an “image” that is symmetrical with respect to the 50Hz spectral line. For example, what appears to be a 2Hz signal can also be seen “mirrored” at 98Hz. This implies the presence of “sidebands” around the 50Hz signal, and thus both the 2Hz and 98Hz signals may actually result from the 50Hz mains being amplitude-modulated by another signal of 48Hz frequency (a known phenomenon resulting from e.g. motor slip).

An easy way to ascertain whether such signals are indeed carried through the neighbourhood by local mains is by simply amplitude-demodulating domestic power supply, very much in a similar fashion to the demodulation process in an AM radio. Al that’s required is a step-down transformer (for safety), a full-wave bridge rectifier and a capacitor to provide some light filtering. The resulting quasi-DC signal, when fed to our spectrum display, should reveal the modulating signal of, as in our example, 48Hz – thus confirming that the originally observed 2Hz and 98Hz signals are fake, and simply the sidebands of amplitude-modulated domestic mains electrticity. You can see a general  example here : 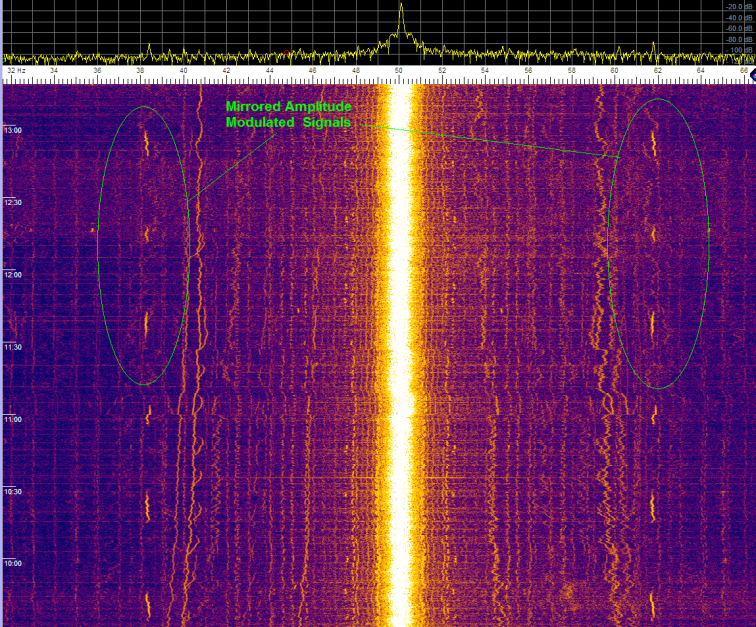 Even though it was not used directly in this test, with Jan’s permission I put here a prototype of one of his ELF receivers . He has conducted several experiments on the reception of the propagation of the amplitude modulation of the electric lines at his home using, as in our case , one or more earth dipoles. For more, please visit his website here : http://vk4ebp.com/index.html

There are many different ways to receive and record electromagnetic waves in the range between zero and 50 Hz. Some amateurs directly connect the soundcard of their PC with an appropriate coil and save the received signals with a software sound-recorder as wave or mp3 file. This method has some disadvantages: The strong 50 Hz mains signals which are received involuntary will overdrive the signal if the amplification exceeds a certain amount. So this method doesn’t permit high amplification values, which are sometimes necessary to detect interesting signals of extremely low level. One good reason to use the receiver presented here.

Many soundcards show a strong and increasing attenuation from 16 down to 0 Hz. To build a high quality ELF receiver, you fist should care for an appropriate soundcard: Use an external USB-soundcard with a linear frequency characteristic down to 1 Hz or even lower. If you can’t find an appropriate type, you can open the housing of the card and replace the serial input capacitor by a bigger one.
The second step to reach the goal consists in using the right recording software. For programmers who are familiar with the question how to access the corresponding software devices in their PC, this may be an interesting challenge, but I recommend a more simple way by using the freely available software SPECTRUM LAB. 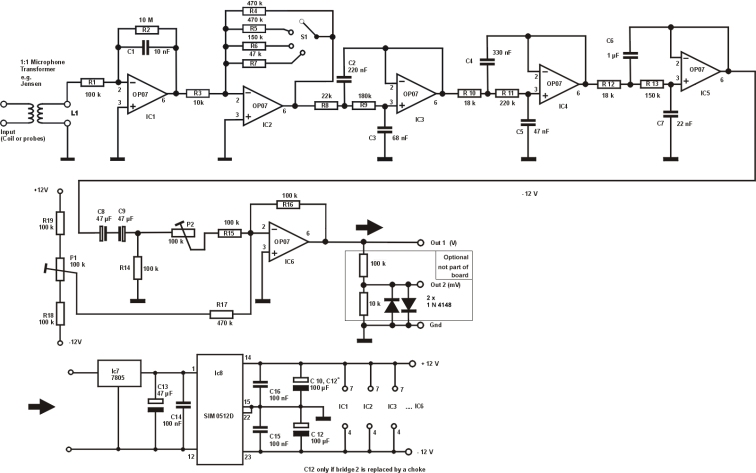 Now we can care about the receiver circuit itself: It consists of 6 single Operational Amps of the type OP07 which have a very low Offset voltage, which is essential at high gain amplifications.In the circuit diagram, you see a 1:1 input transformer with a lower cutoff frequency under 1 Hz. This expensive device (available at JENSEN, USA) is only needed when you intend to use the receiver with earth probes (see end of the article). If you only use a coil, you can omit this device and connect the coil directly to the 100 k serial input resistor.
After a pre-lowpass-filtering and pre-amplifying in the first OpAmp stage, the gain is increased by an inverting amplifier. The amplification can be calculated by dividing the input-output resistor by the pre resistor. With the switch S1 you can set the gain at this stage between (approximately) 5 and 50. The three next OpAmps are working together as Sallen-Key lowpass filter with a cutoff-frequency of 21 Hz. All signals above this value are attenuated with 36 dB per octave, a relatively good value which cares for suppressing even strong mains hum to a non-harmful level. After the filter stage there is a high pass filter which eliminates an eventual offset created by the previous stages. As the cutoff frequency is extremely low, it will not influence the received spectrum. The following OpAmp works as amplifier and adding stage at the same time: By P2, the final amplification can be adapted to the following system (PC). With P1 the Offset can corrected to zero if necessary – or set to another value if required by the following stage. If you want to protect the following soundcard against high voltages, you may add two diodes as shown in the diagram (optional). The type power supply you can use depends on your own environment situation: If you use a set of rechargeable batteries (4 or 5 times 1.2 V in series), I recommend the SIM 0512D power chip which converts a 5 V input voltage to a voltage of two times 12 V which is needed to feed the OpAmps. If the input voltage is higher than 5 V, you can use the 7805 voltage stabilizer chip at the input (optional). You also can connect metal sticks (probes) at the input. This requires the input transformer mentioned above for safety reasons (vagabounding currents): The receiver and the PC connected to it must be completely electrically isolated against the ground where you put the probes in. If you use the probes in a distance of one to five meters, you can receive the same and sometimes also different signals than by coil. 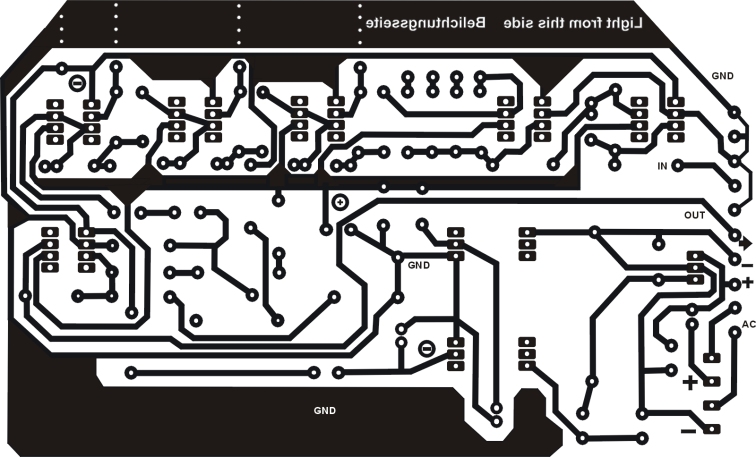 As soon as Kurt’s board arrived, I prepared a couple of different systems in my home garden. The first pair of dipoles, oriented in the N-S position, and directly connected to Kurt board (with an integrated filter that cuts all over 30 Hz) while another pair of E-O-oriented dipoles is directly connected to the PC’s soundcard with a range from 0 to 300 Hz to see any mirrored harmonics up to the main 50 Hz carrier.(Dangerous for earth loops if you try – be careful). These are the pieces of iron I used as dipoles. ( The server did not come in, I was just removing the dust from it ) As PCs and cables came to the garage, I had to put an external wifi repeater to manage them from home, oriented directly to the garage and the garden. 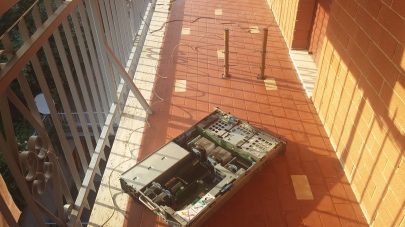 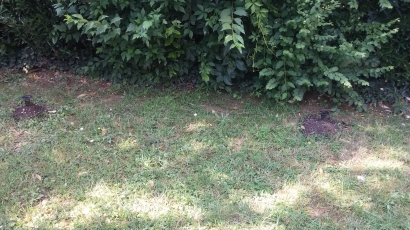 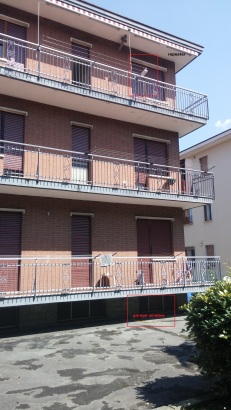 I started the two stations during June 2015, with an outside temperature of about 30 degrees Celsius (pretty hot). The first signal identified was that of my home air conditioning rotary engine. Looking online on that model features, i found that it is the only one of the various models to mount a 3-phase motor instead of the classic single-phase motor, which in contrast does not modulate the 50 Hz carrier as the three-phase one.(tested) In any case, it was easy to see the differences immediately since the engine was starting only when the compressor was on to cool down the temperature and we were able to see that well-identifiable signal in the spectrum as a “slip” around the 2.5 Hz , broadcasting inside my garden!Videos are speeded up n times to make them audible to the human ear. 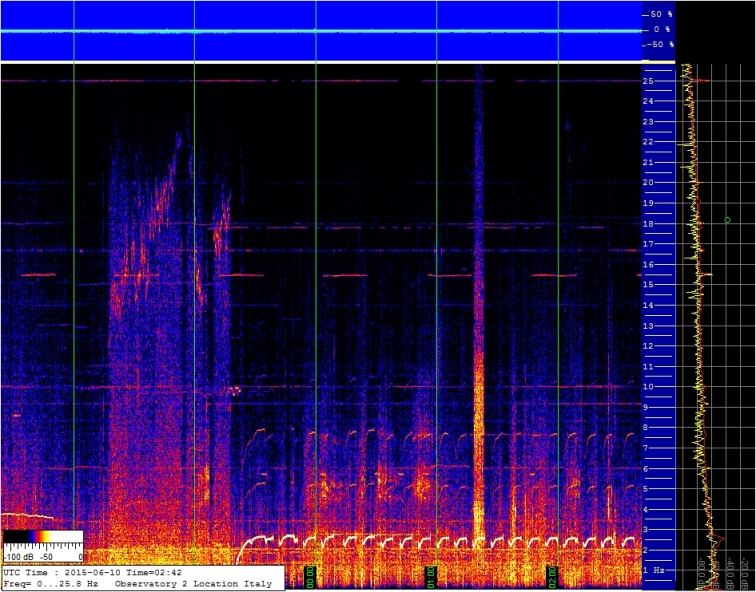 Another easy to spot was my washing machine as well as those of neighbors … As soon as I turned off the switch, the signal was interrupted over time. This obviously did not happened with those of the neighbors;) This is a captured example :

After about two years of data, sometimes we have found really strange signals that we have not been able to identify. Since the modulation was very strong and well visible even on the 100 Hz we assume it is some industrial machines near my home, or something from the railroad. We are not sure. Certainly I can say that the first time we received what we then called “FSK Signal” We were left with our mouth open. We had never seen anything like this and it really seemed that somebody modulated 50 Hz to create a signal in FSK. Whatever it is , remains a mystery.

This one seems like a sort of  beacon . The signal here is not demodulated and the main carrier is about 1 Hz –  1,5 Hz. Using Wavread function  in MATLAB i’ve tried to do an analysis of this signal too. It seems it does not contain any data inside. 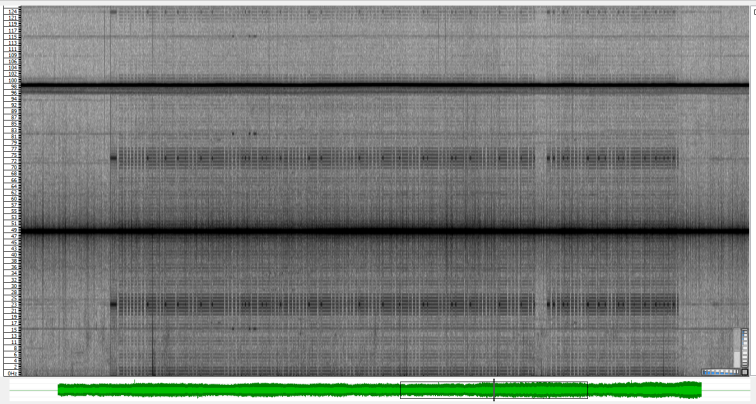 Another exotic one.  we just do not know where and how has been modulated. It sounds like a vocalization of a voice. But of course it is not.
Certainly I had never seen patterns so defined in a power line modulation.Quite Impressive. 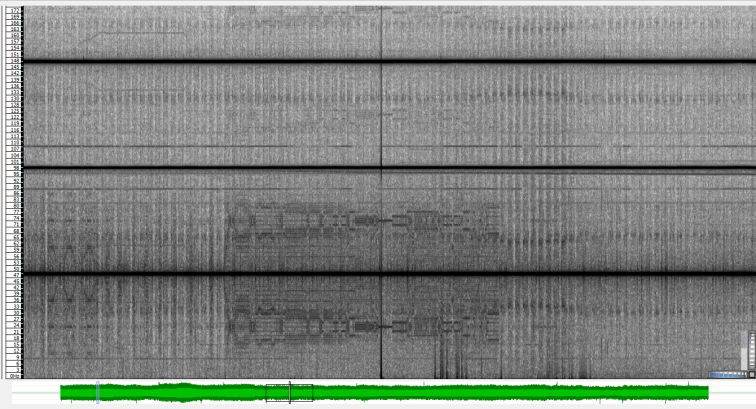 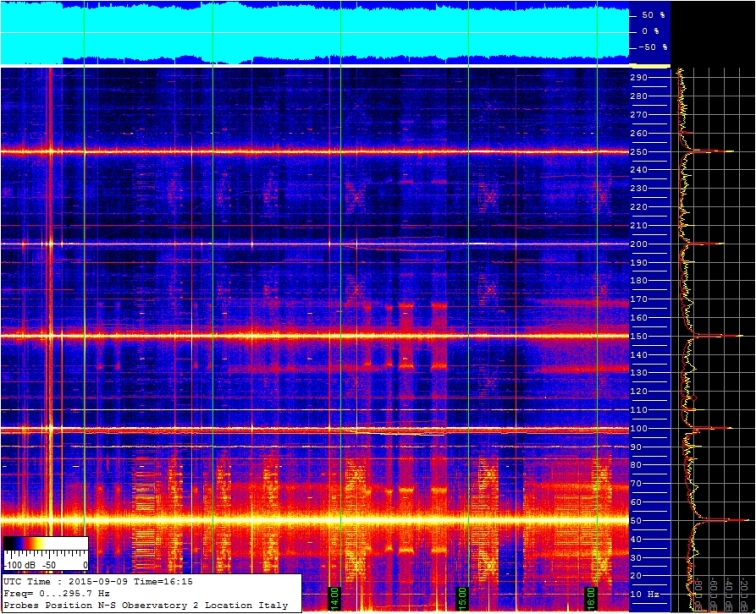 By doing further tests here not presented, we found that these signals do not amplify for more than 300-500 meters, but others can reach kilometers distances. I think that you can capture with a simple earth dipole numerous signals from the local power line. Going up to them with absolute certainty is a job that goes beyond our possibilities, but it has certainly stimulated us and I hope others will continue in this project. With patience and appropriate software, it is also possible to create self-recognition systems for these signals and create an updated database, which I am currently working on. The reason? Having a precise database of these events can be immediately traced back to them when they will be present in coils in rural and quiet areas accidentally or have an idea of ​​what kind of domestic or industrial application can cause them. We have even highlighted signals related to the natural electrochemical conduction in the ground, which sometimes becomes a kind of conductor ( http://www.vlf.it/ed/earthprobes.html  for more )

In the next episode on the 50 Hz monitoring, some interesting correlations between different recording areas using instead induction coils inside the magnetic field,to find ELF noise coming from railways, maybe similar to the San Francisco BART (Bay Area Rapid Transit) events .