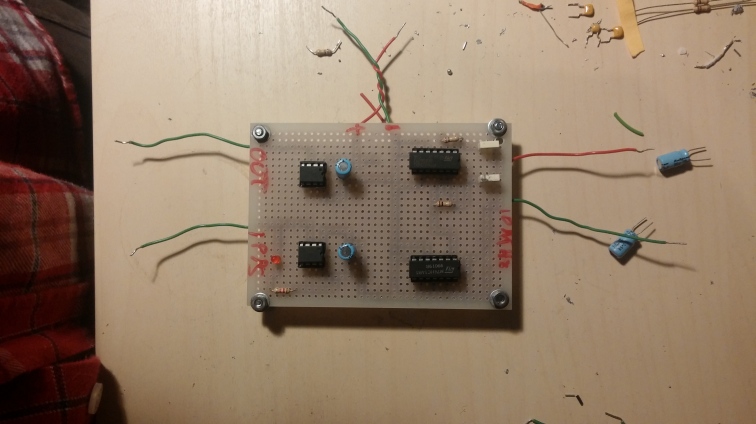 Recently i’ve found some great codes from Tom Van Baak (Leapsecond) and use them  as frequency dividers. You can find the *.hex and *.asm  here I’ve burned some PIC 12F675 using a PIC programmer to have some  CMOS TTL  frequencies for  various applications  One of them was to use the M100, a great military Rubidium Frequency Standard ,as a master clock for my lab/home. The M100 output, as most frequency standards, it’s a 10 MHz sinewave . PICs should take a frequency clock from 0 to 20 MHz and sometimes they do accepts also sine waves. I’ve tried to do some tests using the M100 sine-wave output, but the results were not optimal . So i’ve used two integrated circuits : the first is the 74HC04B1  the output is redirected to a  M74HC14 , an Hex Schmitt inverter to create a square wave.  This output was accepted then  from the PIC input without problems.

This is the circuit  diagram :

According to specifications , it is a  divider that works like a synchronous decade counter and using  8-bit logic. The software inside with the CPU , “spins” every 5 million clock cycles the output pin.Accuracy output it is the same as the input one, with jitter less than 2ps !

Here is the final result. Using the oscilloscope i’m  monitoring the two output : in this case a 10 ms 1PPS and a 1Hz square wave, all directly from the M 100 .